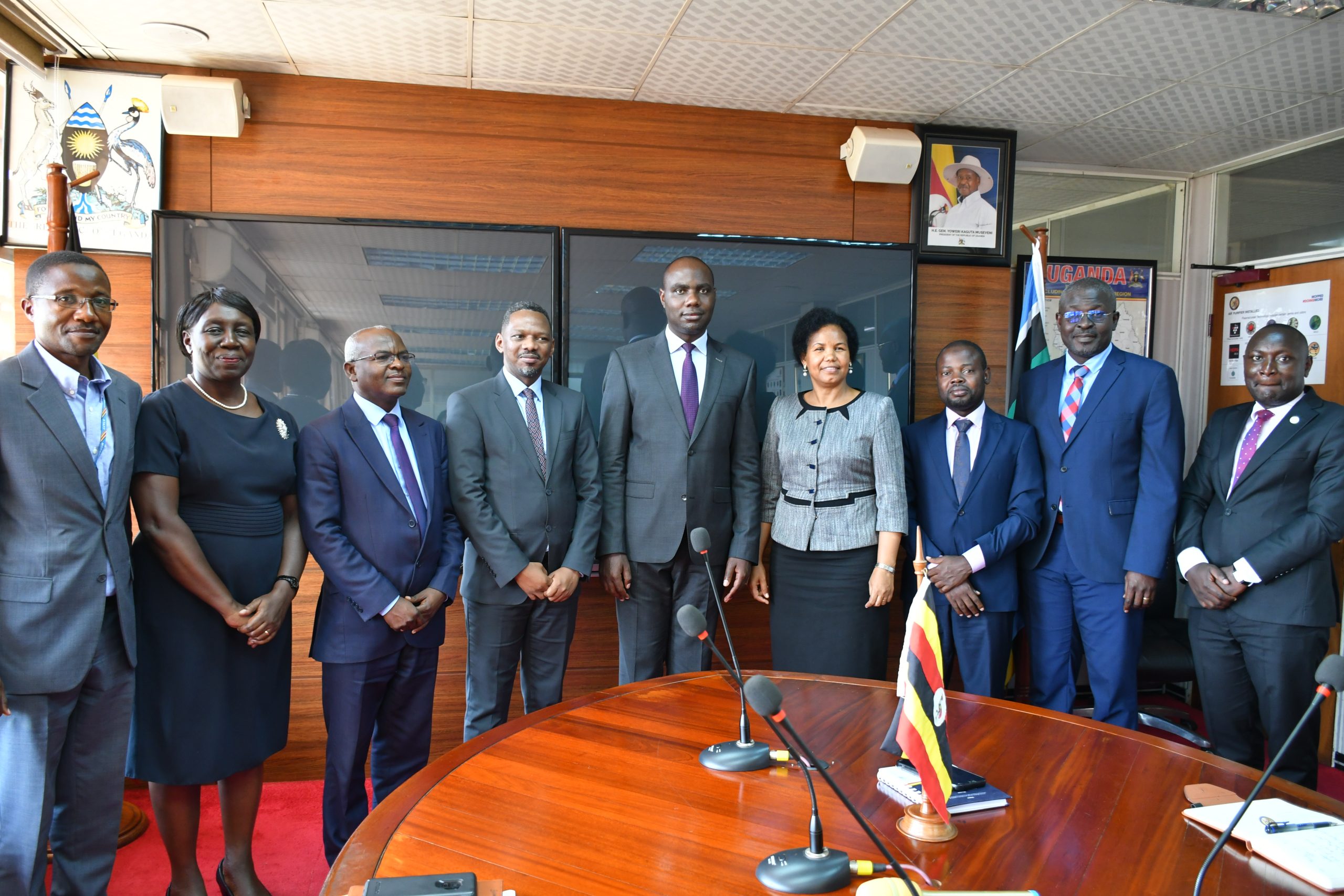 In her remarks, Mrs. Oyet shared a brief overview about DPF, highlighting the core reason for its establishment and further noted that at the deposit insurance limit of UGX 10,000,000, the Fund covered 98% of depositors of Contributing Institutions. She further updated Hon. Musasizi that DPF was a member of the International Association of Deposit Insurers (IADI) and Uganda had been elected to be a member of the Executive Committee which is the supreme decision-making body of the Association. The team then shared their respective roles in the Fund.

Mr. Patrick Ezaga, DPF Director Communications informed the Minister that the Communications Department was charged with driving the public awareness agenda of the Fund. He noted that this was intended to educate the public about deposit protection and DPF, with the aim of building the public’s confidence in the financial sector.

Mrs. Kiryabwire, DPF Director Legal and Board Secretary informed the Minister that the Fund was in the process of developing   a stand-alone law (DPF Regulatory Framework) and as such, had undertaken a regulatory impact assessment in which members of the banking sector were involved. She also highlighted that the Fund, was working in close collaboration with Bank of Uganda on the regulatory framework.

In his update to the Minister, Mr. Yusuf Mukiibi, Director Finance and Operations noted that his department was in charge of overseeing the internal financial operations of the Fund as well as the premiums contributed by Contributing Institutions.

Mr. Alan Lwetabe, Director Investments updated the Minister about the Fund’s investment model, noting that the premiums collected from Contributing Institutions are invested in government securities. He noted that the Department is mandated to grow the fund size to cover at least 20% of total deposits at any time. He further informed Hon. Musasizi that the Fund is an active participant in the financial sector, noting that DPF is the incoming Chair for Working Group 3 (WG3) of the Financial Sector Stability Forum. The Working Group will focus on crisis management and preparedness.

In his update, Mr. Balaam Ssempala, Director IT, noted that the Department was implementing the Depositor Payout and Premium Management System which would be used to pay depositors in the event that a Contributing Institution is closed, as well as manage premiums collection.

Ag. Director Internal Audit, Mr. Samuel Mankaati noted that the Department’s role was to provide assurance that the Fund’s governance and internal control processes are operating effectively, thereby enhancing its value. He further noted that for the past five years since inception, the Fund had received unqualified reports from the Office of the Auditor General.

In his concluding remarks, Hon. Musasizi appreciated Mrs. Oyet and her team for the courtesy call noting that the Fund’s role in building confidence of depositors in the financial sector was crucial to the economy. He thus committed to supporting the Fund in its undertakings in order for it to effectively deliver on its mandate.