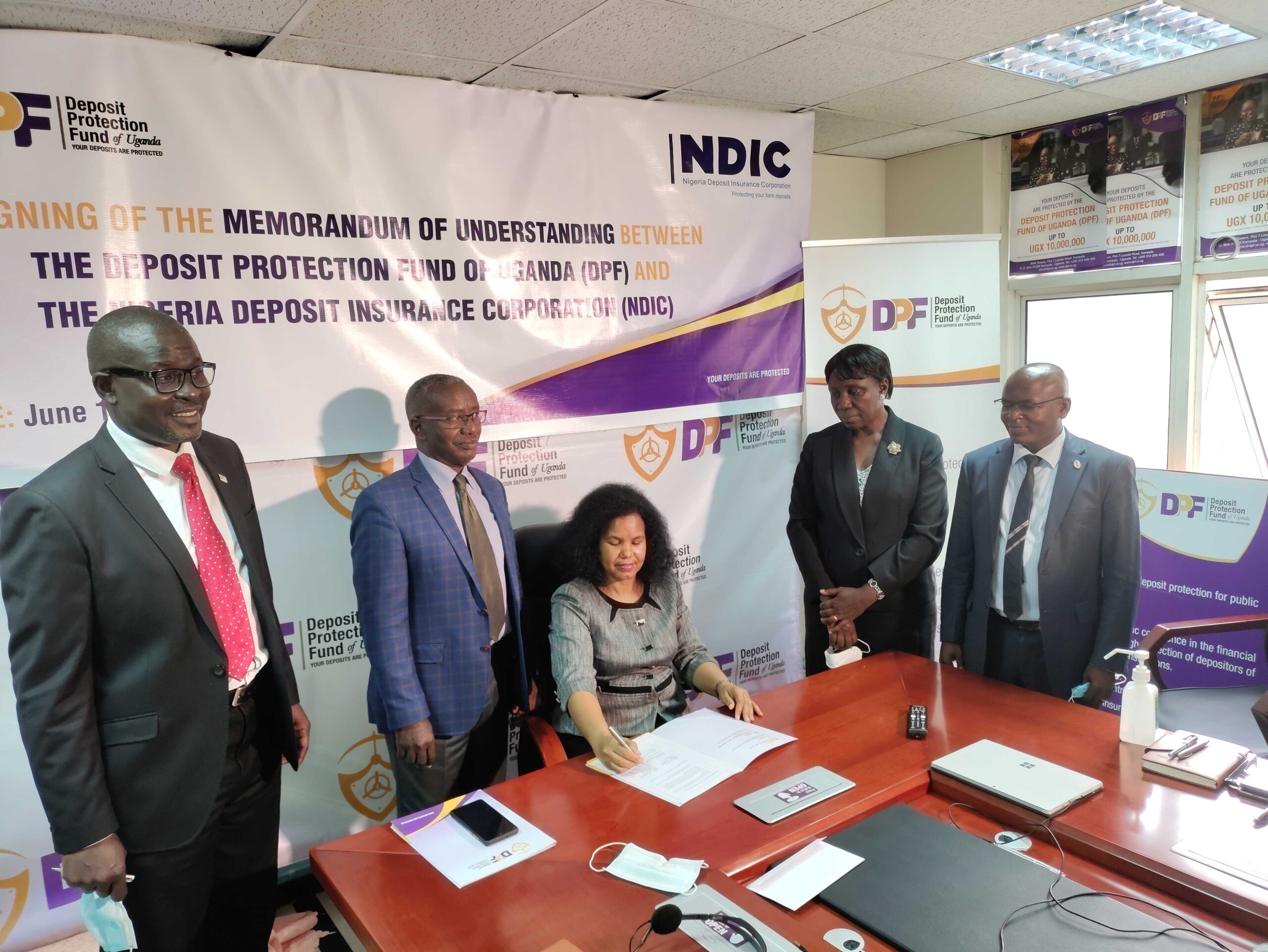 The Deposit Protection Fund of Uganda (DPF) and Nigeria Deposit Insurance Corporation (NDIC) entered into a Memorandum of Understanding (MOU) on June 15, 2021. The MOU marks yet another milestone in the lifespan of the two organizations and formalizes a long-standing collaboration between them.

The Deposit Protection Fund of Uganda was established under an Act of Parliament with the mandate of acting as a deposit insurance scheme for depositors of deposit taking institutions regulated by the Central Bank of Uganda. In addition, DPF may act as a receiver or liquidator if so appointed by the Central Bank.

The MOU provides for collaboration in the areas of bilateral meetings between the participants, information sharing and other areas of mutual interest, personnel exchange, responsibilities of the parties, commitment to confidentiality and dispute resolution mechanisms.

The MOU was signed by Ms. Julia Clare Olima Oyet, the CEO of Deposit Protection Fund of Uganda and Mr. Bello Hassan, the MD of Nigeria Deposit Insurance Corporation. The ceremony was witnessed by the members of the Board and management of the two institutions.

On the part of DPF the board members present were; Mr. Patrick Kagoro (Chairperson), Mr. Andrew Obara, Mr. Kalema Musoke, Mr. John Byaruhanga and Mr. Solomon Oketcho with apologies being received from two other members.

Ms. Julia Oyet, the CEO of DPF presented a synopsis which traced the origin of the relationship between the two institutions to the initial stages, noting that it was indeed a pleasure to see what started off with baby steps mature into the MOU. She paid special tribute to the former MD of the NDIC, Alhaji Umaru Ibrahim who pledged from the onset to give the then ‘baby’ DPF all the possible support to enable it grow into a strong deposit insurance agency in the African Region. She noted that depositors in both Nigeria and Uganda are faced with very similar challenges with the majority of them being at the tail-end of the economic chain with regards to the resource envelop at their disposal. The CEO emphasized that with such similarity, it was only prudent for the deposit insurance institutions of the two nations to thrive on benchmarking and knowledge transfer between themselves. She further noted that effective collaboration and networking had become key tenets of survival in the global maze of technology. The historic signing of the MOU therefore formalizes the already cordial relationship between the two institutions.

On his part, Mr. Bello Hassan, the MD/CEO of NDIC remarked that the MoU is expected to facilitate technical assistance in the area of Deposit Insurance and failure resolution to aid the promotion of communication, enhancement of existing levels of cooperation; provision of support, mutual understanding, and collaboration on areas related to the development of the deposit insurance systems in the two jurisdictions. He noted that it will also provide for the effective international working relationship between both parties along with the enhancement of their roles in financial supervisory initiatives and policy deliberations. He further noted that there will also be periodic exchange of staff between both institutions and bilateral meetings on regular basis towards enhancing mutual understanding that promotes the development of the Deposit Insurance System (DIS) in both Nigeria and Uganda. He emphasized that through the exchange platform provided by the IADI-ARC, the two sides have established friendly and mutually cooperative relations. The MD/CEO pointed out that the signing of the MOU will further deepen exchanges and information sharing between both sides and pave the way for closer cooperation.

In his vote of thanks, the DPF Board Chairperson Mr. Kagoro congratulated the two institutions for this historic stride which he said would go a long way in enhancing the already cordial relations between the two organizations. He appreciated the selflessness of NDIC for their commitment to sharing valuable information with sister institutions which has enabled nascent organizations like DPF to benchmark and learn from the best. The Chairperson reiterated the commitment of the DPF Board to ensure the implementation of the provisions of the MOU and commended the boards and management of both institutions for this noble achievement.

The Deposit Protection Fund of Uganda has released the 2019/2020 Annual Report and Financial Statements.…